It is without a doubt that the most rewarding part about tutoring here at A Team Tuition is witnessing the seamless transformation of students unfold right in front of our eyes. With the recent launch of Project limitless Brisbane, we sat down with our winners Sarive Zena and Esther Abiya, whom, over the course of semester one, have truly embodied what it means to be limitless. Their resilience in overcoming adversity and taking control of their education is the epitome of the type of young adult that A Team Tuition strives to foster. In 2017, Project Limitless, a program designed to completely transform a struggling student into a master of their own academic strategy, was launched on the Gold Coast. In line with A Team Tuition’s values of Analysing, Inspiring, Teaching and Mentoring, the program, worth $5000 guided our winners Skylah and Waide from failing students, to achieving A’s and B’s in all their subjects, Following this success, in 2018 A Team Tuition launched Project Limitless Brisbane, with an added upgrade –a $10,000 package! . This project aimed to validate our results with Skylah and Waide and to provide support for our theory that success is merely the combination of having a growth mindset, a solid support network, and the right academic strategy. During the application process, after hearing the story of sisters Esther Abiya and Sarive Zena, we could not find a pair more deserving of the scholarship prize and thus, one scholarship became two. Excited to embark on a journey to achieve illustrious ‘A’ grades, Esther and Sarive began their journey with us in April, alongside two of our best and brightest Academic Personal Trainers Lexie MacHunter and Katie Jansen. Prior to commencing the project, Esther and Sarive lacked the strategy to flourish academically. Although motivated, the girls were treading water, only just managing to stay afloat. With every ‘average’ grade, their fixed mindset that they would never succeed academically was justified. The girls knew that they needed to be pointed in the right direction – this was the underlying motivator for them to hit submit on their applications at the start of the year. A Team Tuition believed in Esther and Sarive’s insurmountable level of motivation, and within just one term of tutoring, the girls triumphed, heads above water, progressing from a mere pass grade, to A’s and B’s! It appears that the valuable mentorship from tutors Lexie and Katie, combined with the drive and open-mindedness of Esther and Sarive was a perfect recipe for success.

To kick-start her academic make-over, Esther was paired with one of our most experienced and confident Academic Personal Trainers, Lexie MacHunter. Having completed an engineering degree, and currently studying law, Lexie’s evident comfortability with change and desire to learn were attributes that we believed would perfectly match Esther. 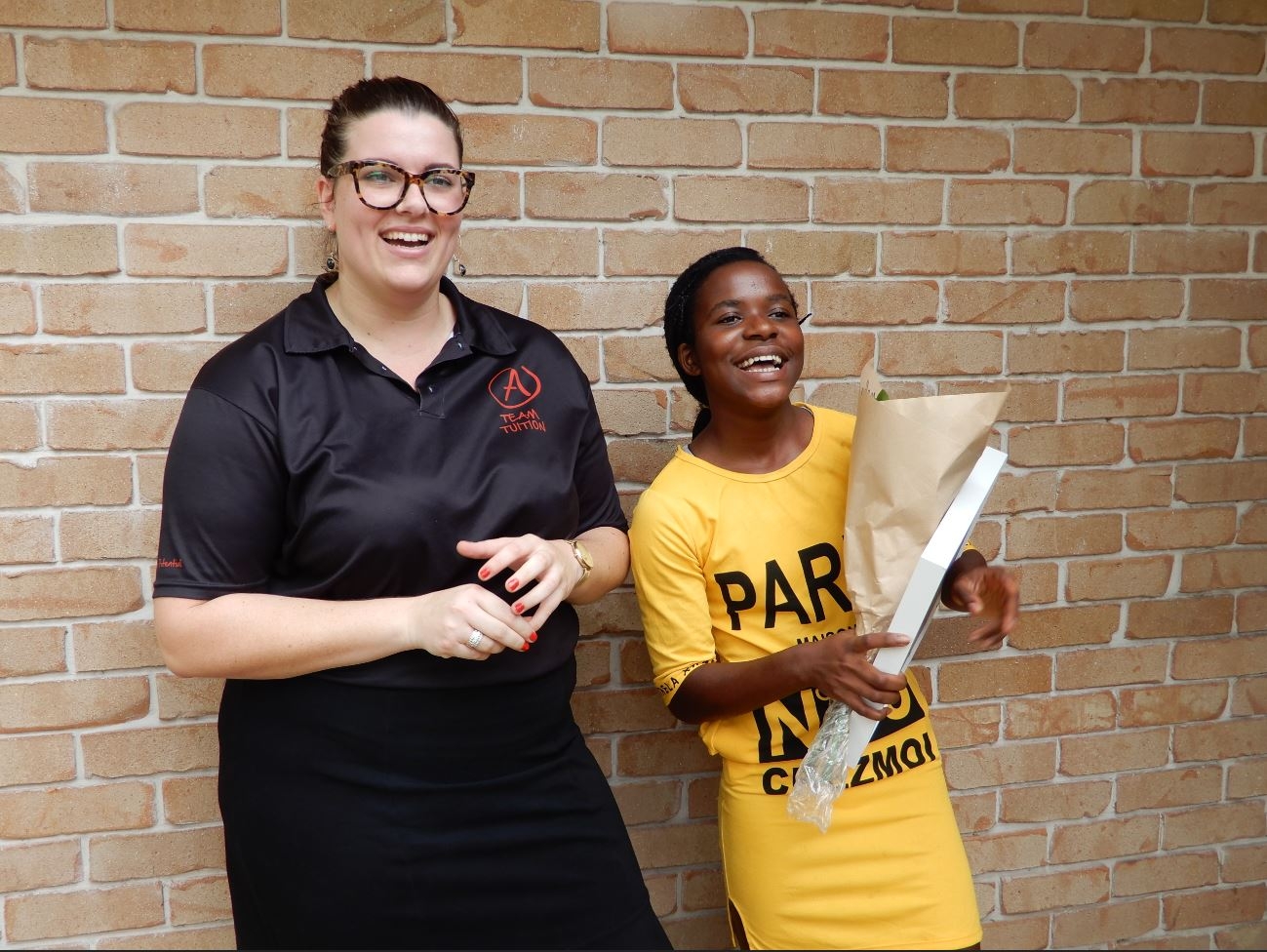 From day one, both Lexie and Esther showed an unyielding desire to make the most of what the scholarship had to offer. In a recent interview, Lexie praised Esther’s mature outlook when it came to goal setting. “Esther’s attitude was always in the right place. From the outset, she knew what an opportunity this was and has gone out of her way to work towards the goals that we set together.” From Lexie’s perspective, taking Esther back to the basics, to develop her maths and science skills, was the most important determinant of her progress. This technique surely paid off, with Esther receiving an A+ in Science on her first assignment since starting tutoring. Progress didn’t stop here – the successes continued to stream in. In the following weeks, Esther received an A in Information Computer Technology, an A in Religion (and was very proud to receive an A+ in the Knowledge and Understanding criteria) and an A- in History! Overjoyed with her results, Esther had nothing but praise for the help given to her by Lexie. “Lexie is absolutely amazing! She makes tutoring really enjoyable and exciting. She constantly challenges me to push myself to be the best version of myself.” Lexie believes that her success with Esther is the result of the way she approaches tutoring. Rather than adopting an authoritative stance like a teacher, Lexie claims that she wanted to portray herself as a mentor and a friend. And She wanted to ensure that the A Team Tuition collective also contributed to Esther’s development. “It’s called A Team for a reason; students and Academic Personal Trainers both benefit from our valuable support network.” According to Esther, having an adult, aside from her parents and teachers, whom she could build rapport and trust with, was a key factor contributing to her success. “I don’t only look up to her as a tutor, but also as a mentor and a friend,” smiled Esther. Esther’s semester one grades reflected her commitment to the project. Keeping in mind that Esther’s results from Term one (without Lexie’s help) contributed to her overall grades for the semester, receiving B+’s and an A- in such a short period of time has left everyone here at A Team wondering what she could possibly achieve throughout the rest of the year! 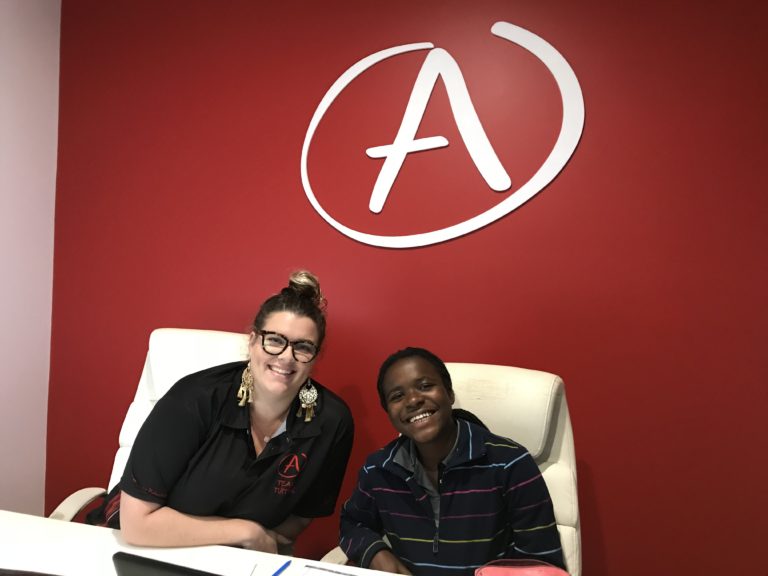 Esther herself is proud of her results and is astounded by the fact that her attitude and approach towards school has switched so dramatically. “My perspective on school has changed so much for the better. I am constantly learning on how to become a better student and be a wiser person.” Lexie is finding Esther’s attitude is rubbing off on her as well remarking that, “Esther’s drive and determination is contagious; it’s hard not to be the same!”

Sarive and Katie’s relationship mirrored that of Esther and Lexie’s, but with Sarive being a Year 12 student, her future plans were the underlying motivators for her school transformation goals. With awareness that Sarive’s primary focus was improving her overall educational portfolio in preparation for her post-school career, Katie identified that the best approach for tutoring Sarive was to identify the common denominators across all of her subjects that were generally holding her back. Katie commented that within one session she was able to identify Sarive’s academic strengths and weaknesses.

“Her English skills were a bit behind and this made it difficult for her to believe she could lift her grades. When first reading over her work, I realised that she was making mistakes in her spelling, grammar and punctuation which could easily be avoided by editing and reading over her work.” Katie also recognised that Sarive struggled to articulate and comprehensively explain her ideas, limiting the quality of her assessment pieces. Katie made a point of noting that it wasn’t that Sarive didn’t understand what she was learning, rather, she struggled to reiterate information and explain it in her own words. Sarive expressed that Katie helped her address this issue. “Katie did a fantastic job. She was a good listener. She understood me and picked up clues of what I was trying to say and helped me how to say them.” These English-based difficulties are common for our students here at A Team. Often students struggle with being concise, clarifying their point and using proper punctuation. Katie did an exceptional job of addressing these fundamental skills whilst Sarive was in the middle of a hectic assessment period. After a few speedy sessions on punctuation how-to’s, Katie claims that she came to notice Sarive picking up on the little tips and tricks that she was suggesting. “There are so many things that I learnt from Katie. She taught me to watch out for spelling errors while writing, to read each sentence aloud, to always follow a structure, to always read the ‘A’ criteria column, to re-read my work before any draft, to not let other people distract you while presenting and so much more!” reflects Sarive. In just one term, Sarive jumped from C’s to B’s and only just fell short of receiving an A in English! Considering it can often take years to instil effective writing skills in students, Katie was immensely proud. 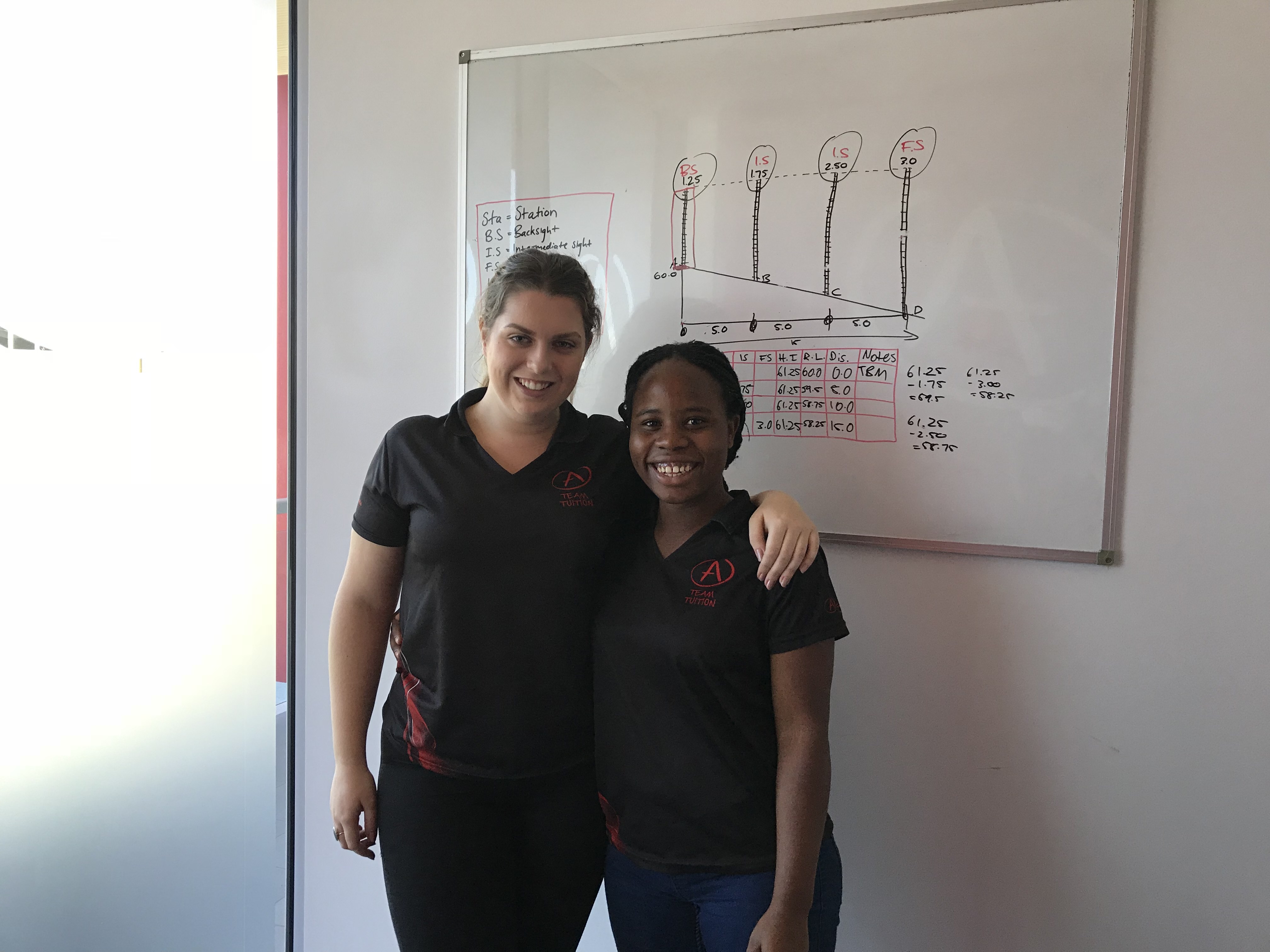 “This was a huge transformation for her as it made her believe she could not only achieve a B, but has the potential to become an A level student! Sarive became extremely self-motivated and dedicated herself to completing all her schoolwork every week. Her conscientious attitude allowed her to hand in her work on time, increasing her confidence with each completed assignment.” Katie, like Lexie, wanted to be someone who could add diversity to Sarive’s support network. In this regard, Katie claims her focus was on encouragement and building trust, instead of merely giving Sarive instructions. “I was someone who was there to support her, not only in sessions but throughout the week via email and text. I became someone she could rely upon and trust, and from there I was able to encourage and motivate her to do her best”

For the last session of term two, the girls sat down with their academic personal trainers to reflect on their progress over the course of ten weeks and formulate process goals for the following semester. Aiming high is clearly no overstretch for these girls, with Esther hoping to maintain her current grades and achieve a golden palm (straight A’s in all of her subjects) and Sarive hoping to achieve an A in any one of her subjects! The girls have even written out a step-by-step plan for the following term to keep themselves accountable – something we bet every parent of teenagers can only dream of! With Katie’s graduation soon looming she has recently passed on the reigns to Makaela Fehlhaber a specialist English tutor whom is currently studying a Bachelor of Laws/Bachelor of International Relations. Sarive is excited to be starting with Makaela, whom she knows will be able to assist her with her goal of achieving straight A’s in Legal Studies next term for her Independent Research Project! Inspired by Katie, who studies a Bachelor of Criminology and Criminal Justice, Sarive now wishes to enrol in a criminology degree. She will be working on her university applications during the upcoming term. Lexie will continue working with Esther, a year 9 student, who has already started planning for life after senior schooling. Esther dreams of studying a Bachelor of Laws and specialising in Human Rights Law – making Lexie an even more perfect match! From our perspective, above and beyond school grades, perhaps the most admirable advances for Esther and Sarive thus far is their character development. Their fixed negative mindset’s – nowhere to be seen. The girls are now radiating confidence and positivity. Their energy emanates as soon as you walk into a room, and their smiles are a testament to the fact that hard work can be fun, especially when you reap the rewards! Stayed tuned for periodic updates on the girls’ transformation into next term. Gold Coasters: keep your eyes peeled on our Facebook, Instagram, and website for the next Project Limitless instalment…you won’t want to miss this opportunity.