We here at A Team Tuition feel as though we have known for some time what it takes to get a student to achieve their goals, irrespective of their starting position.  These are the key proponents of our philosophy and whilst we are continually refining this practice and honing our skills, just like we help our students to, we decided it was time to test this theory.   So, in 2017, Project Limitless was born.   What started as an experiment to see how much we could transform a student if we gave them the right mindset, support and strategies to succeed at school, quickly turned into the realization that these scholarships had the ability to completely change lives.  In turn, it has continued to shape our business and the lives of everyone involved, not just the students.   We did this through our partnership with Miami State High School, where we gave away two $5,000 tutoring scholarships to two students who possessed all the qualities of an elite performing student in terms of their drive, resilience, and passion, but were perhaps struggling with their direction, or the skills and strategies to achieve their goals.   Our first two winners, Skylah and Waide, were tutored by two of our superstar Academic Personal Trainers – Libbie Rowley-James and Malcolm Schulstad – and, through the utilization of our Creating A Students program, as well as personalized elements for each student, both Skylah and Waide rose from D/C- standard students to both achieving A’s and B’s in all their subjects!   With this great victory achieved, A Team Tuition began looking for the next big challenge to conquer. Very soon, it became obvious that Brisbane city and its students were in need of their own glimmer of hope – and so, we sought to launch our next Project Limitless Scholarship in Brisbane!

The 2018 Scholarship has been our greatest venture yet – this year, we have increased the prize to $10,000 with 100 hours of tutoring across the year, focused solely on helping any student from any grade level, in any Brisbane area, to achieve the success they deserve.   We launched our venture by opening up the scholarship to any and every student in years 7-12 and soon the applications were flooding in. A few superstar applications stood out to us immediately, and we soon had the honour and privilege to meet with some wonderful students with some incredible stories.   While there were some amazing students – all of whom deserved the scholarship – some candidates stood out above the rest.   Therefore, we are incredibly proud to announce our two incredible winners of the Project Limitless Brisbane Scholarship – Esther Abiya and Sarive Zena! 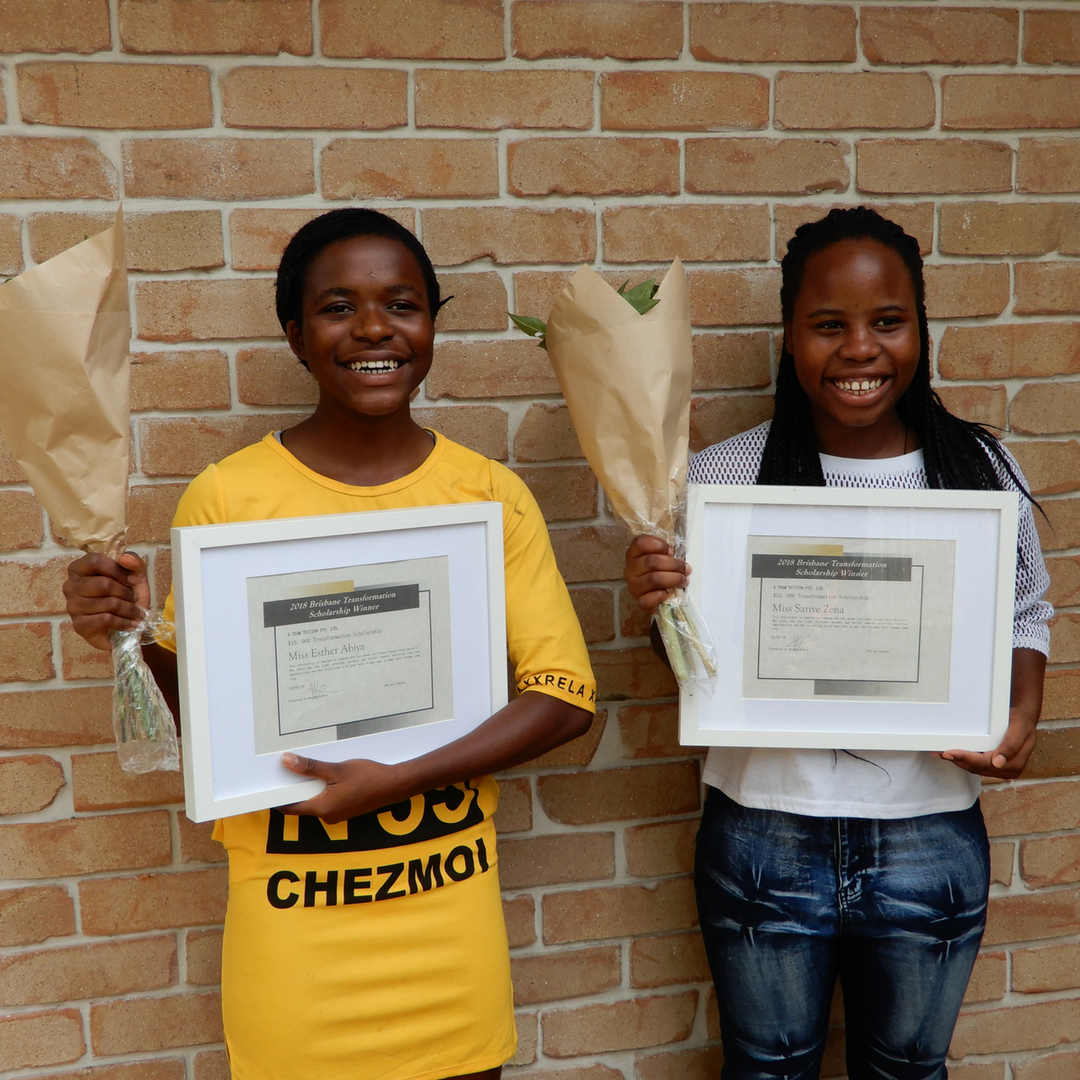 Meet our Scholarship Winners Esther Abiya and Sarive Zena!   Esther and Sarive are actually two sisters, both of whom applied for our scholarship. From the very first moment we encountered their story, we were absolutely blown away.   The story actually begins with the girls’ mother, Francois. In 2003, while 7 months pregnant with Esther, Francois was forced to flee the Democratic Republic of Congo – her home country – with her two eldest daughters, one of whom was Sarive. The Democratic Republic of Congo is a viciously war-torn country, and due to experiencing the loss of her husband and extended family, Francois was anxious to seek out a new life for herself and her daughters.   They spent the next five years in various refugee camps around Africa, where Sarive and Esther received minimal education, being placed in classes of up to 40 students. Finally, in 2009, they were rescued by a missionary, who helped sponsor their application to come to Australia and work towards a better life.   Now, almost 10 years later, Francois has happily remarried, and in seeking to repay the kindness shown to her, has adopted 11 children in the hopes of giving them a better life. Along with their biological and half-siblings, this means that Esther and Sarive are a part of a family with 15 children!   This, of course, has come with its own challenges. Both girls wake up incredibly early in the morning to prepare for their day. Esther, a Grade 9 student, has maintained B grades through getting up at 5am to study before her family wakes up; Sarive, however, is in Grade 12, and therefore needs to shoulder some responsibility for her brothers and sisters.   “I arrived in Australia in Grade 3 and was faced with many challenges including the language barrier. I had to learn how to read and write in English, and I was almost 4 years behind everyone,” Sarive noted in her application.   “On top of that, it’s my responsibility to cook for my siblings and help clean the house, as well as fit in my school work.”   “But through all the difficulties that I have faced, I have never wanted to give up. I know that education is the way to make my dreams come true, and help my family.”   So, to anyone who might witness a story such as this, you would think that their family history is enough to be deserving of this scholarship, and whilst it was immensely humbling to be presented with this story, it wasn’t what drove us to select them.   At A Team Tuition, we don’t use factors such as intelligence and grades as indicators of how well a child will do in school – or life, for that matter; instead we focus on character traits such as resilience and attitudes towards success. And boy, do these girls have it by the bucket load!  (We have a whole theory on this – you can read it here)   Despite having already overcome more challenges than many will have to face in an entire lifetime, the gratitude that both girls showed just to be selected to participate in the interview process shone through them.  They never speak about their experiences as a ‘set back’, but always about how it has helped them strive to achieve things that many may take for granted.   After a few weeks’ worth of interviews, it was easy for us to see how deserving these motivated and driven young women were of receiving the scholarship.  During the interview, both girls were asked how they would feel if the other were selected to be the recipient of the scholarship.  With absolutely no hesitation and a cheeky grin to one another, they both piped out, “That would be the absolute best, she deserves it so much!”   And so, on the 24th of March, we headed out to the girls’ family home in Forest Lake, Brisbane, to tell the amazing news – they both had won!  It had become clear to us that there was no way that we could pick one over the other, so the decision was made that the scholarship would be split across the two siblings!   This was still unbeknownst to Sarive and Esther, so when we arrived at their house on the Saturday to announce the winners, both girls congratulated each other without even suspecting that they both received it!  You can watch the video below to see their reactions.

For both the girls, the opportunity to receive one-on-one support, using a program that is tailored specifically to their needs and learning styles, is mind-blowing.  For Esther who is already a state level track and field athlete, it is more than a competitive advantage in the classroom:   “I know that this will make me go and be a better person, who is more motivated with school, and it will help me grow so much mentally.”   “Maybe I could also top Maths,” she added sheepishly.   The sentiment is somewhat similar for Sarive, who started schooling much later than her younger sister. For her it is to really feel her potential:

This hasn’t dampened Sarive’s ambition. In her final year of High School, she mentions the reason she wants to do so well is so that she can get into university to study either forensics or criminology.  An avid AFL player, who manages to fit in training and competitive play around her already jam packed schedule, she also has hopes to play for the Brisbane Lions in the Australian Football Leagues Women’s competition. 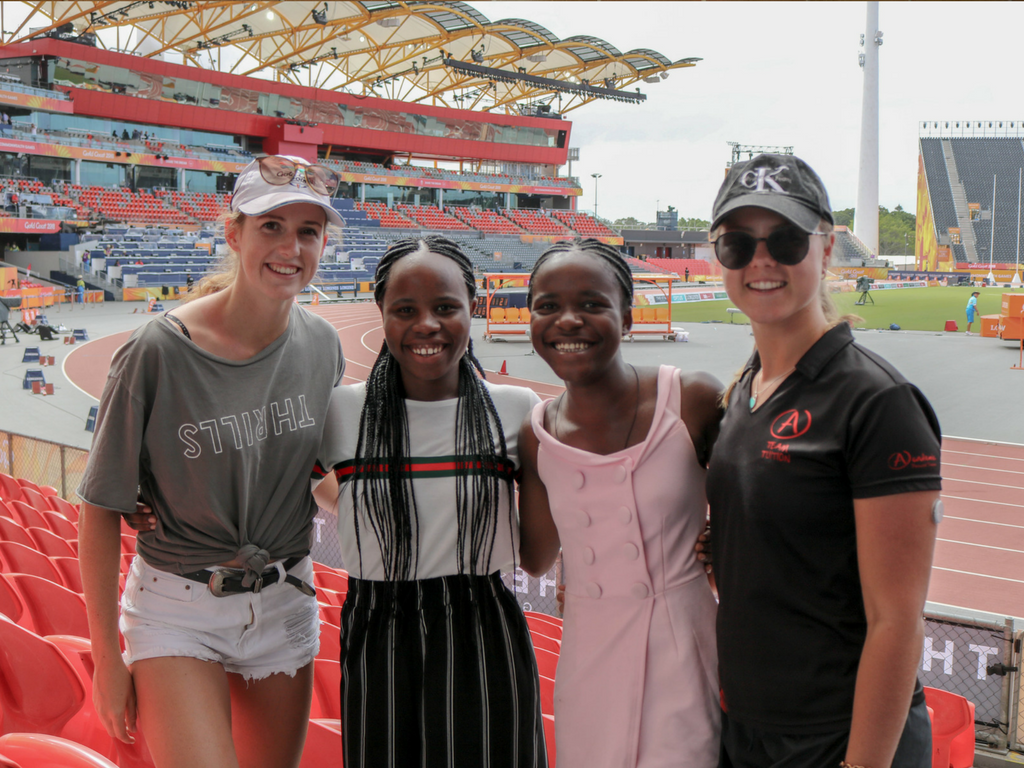 So, when an opportunity arose for us to take both girls to see the Athletics at the Commonwealth Games on Thursday the 12th of April with Australian heptathlete Casidhe Simmons, we jumped at the chance!   It was an amazing experience for the girls not only to witness elite athletes in action, but also to meet and pick the brain of someone who has learnt to manage not only a bachelor’s degree, but also perfected seven sports!  To us, it was also an opportunity for the girls to see that the same things make a successful student are the same things that make a successful athlete, or business person, or musician (we have a theory on this also – you can click here to read about it!).  It still requires grit, commitment and a healthy appreciation for failure to say the least – the only thing that is different is your playing field and your equipment! After an action-packed day, the following day the girls had their official Scholarship Orientation day in the A Team Gold Coast Office. They were gifted their own personalised stationary and had the opportunity to officially meet not only their brand new Academic Personal Trainers, but also Olympic Gold Medalist Yolane Kukla! 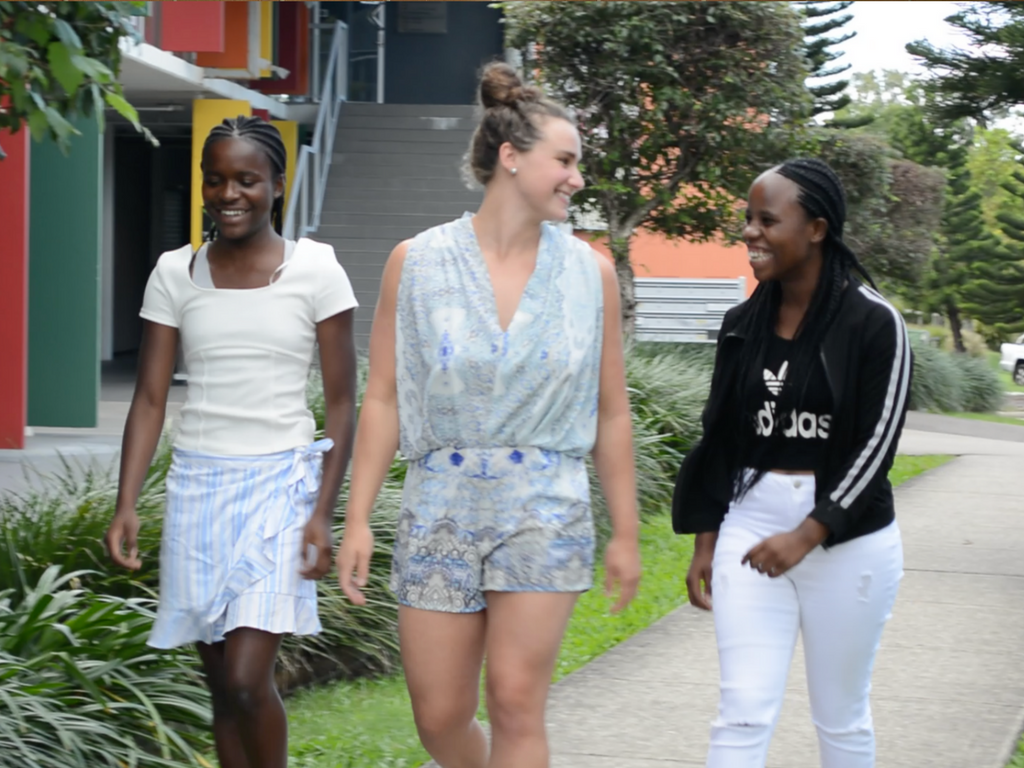 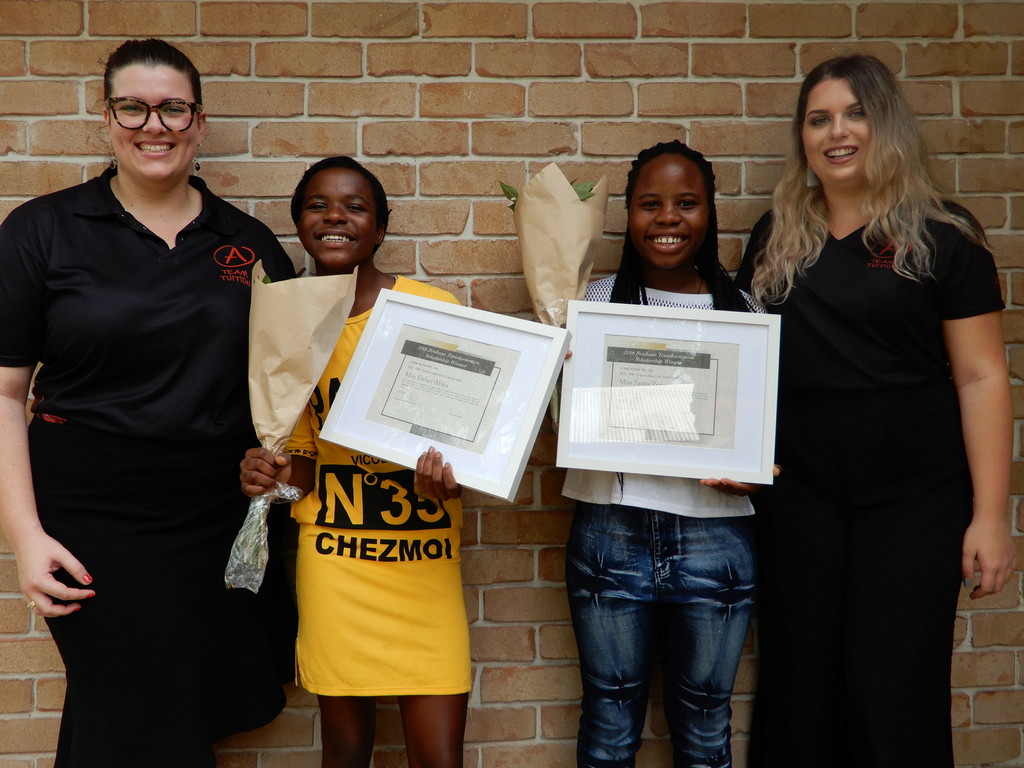 Sarive has been matched with one of our senior English tutors and Academic Personal Training Consultants, Katie Jensen! Katie is in her final year of her Bachelor of Criminology and has had some remarkable impacts on her student, including getting one of her very unmotivated students from a D- to an A- in English.  When asked about the achievement, she mentions that one reason as to why she is so proud of this transformation is because that student now believes he can be an A student.  Katie is equally as excited as the girls to get started and is hoping to help mentor Sarive to challenge her self-beliefs and guide her to capitalise on her already impressive attitude towards study and life.   Esther has been matched with our senior Maths and Science tutor and Team Manager Alexandra MacHunter! She is a perfect fit for Esther, who is still deciding between a potential career in either Human Rights Law or Science. Lexie (as she is affectionately known to us) has a Bachelor of Chemical Engineering and is now studying her Masters in Law.  Lexie notes how contagious Esther’s excitement is, and is really looking forward to pushing Esther to truly realise her own potential and to set goals that will help her fulfil this.   It is needless to say that in the short time that we have had with these vibrant and captivating young women, we here at A Team Tuition have already been profoundly impacted by their presence.  We are beyond excited to watch their transformation unfold, and equally as grateful to be a part of it.  Be sure to keep an eye on the blog and our social media for updates as they progress throughout the year.   This won’t be all that you’re hearing from Project Limitless this year – Gold Coasters, keep an eye out as we get ready to give away another scholarship to one lucky recipient! We will release all of the details shortly, so make sure that you are following our social media pages for all the details! 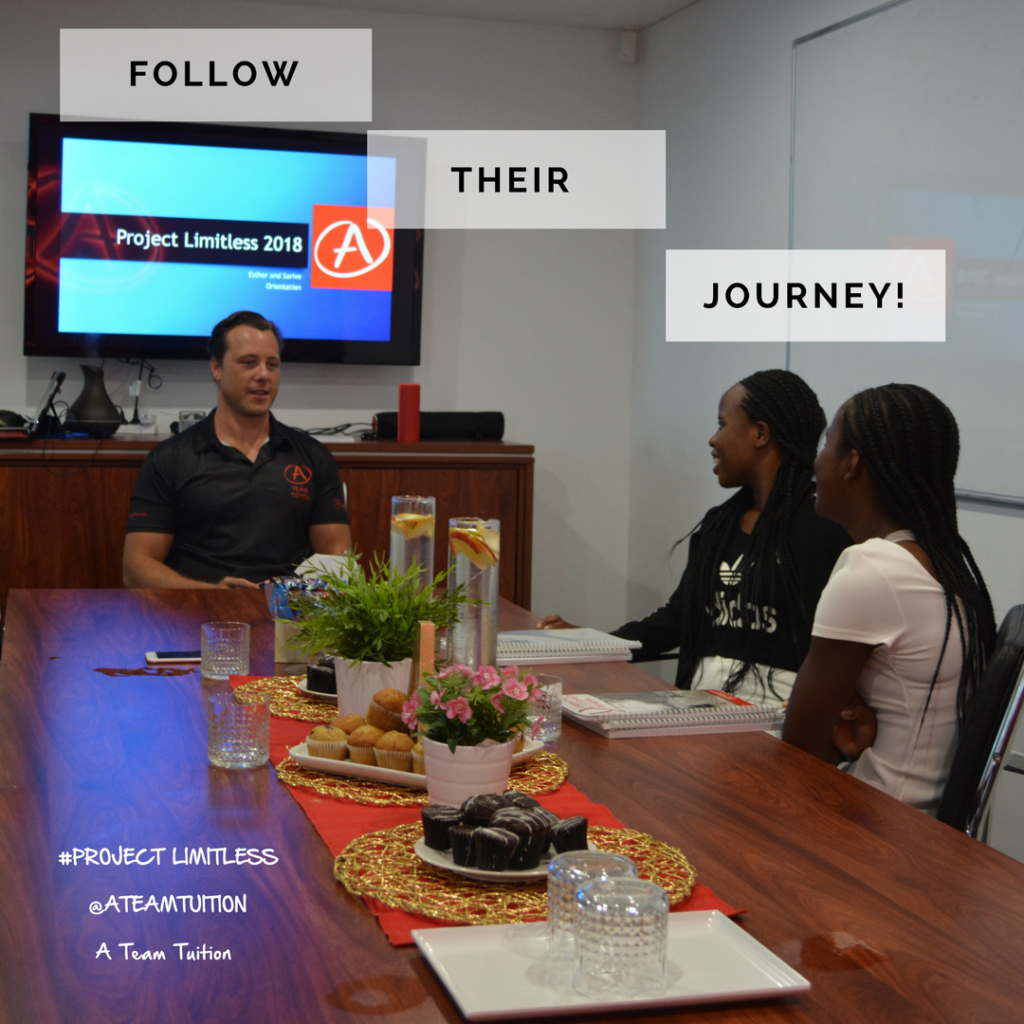