Letting Go to Let Them Grow!

When I talk to parents on the phone about how they manage their children, I can practically see their puzzled expression through the phone. It seems like such an odd concept to ‘manage’ a child and often the thought evokes images of bratty sequin covered children and petty squabbles akin to a scene from dance mums. Our parenting expert Janine McEvoy, however, explains that managing your child effectively is one of the most crucial components to their development.

Other than being extremely annoying, micro-managing has another significant negative consequence; it leaves victims feeling like they have no idea how to do their job.

There are a few lucky individuals who have mastered the art of not internalising these experiences.  These people have enough insight to see that their micromanaging boss’ actions stem from a cataclysmic fear of failure. For most others, however, constant micromanagement is pretty damn debilitating, and slowly seeps into their subconscious whispering, “You’re not good enough.” 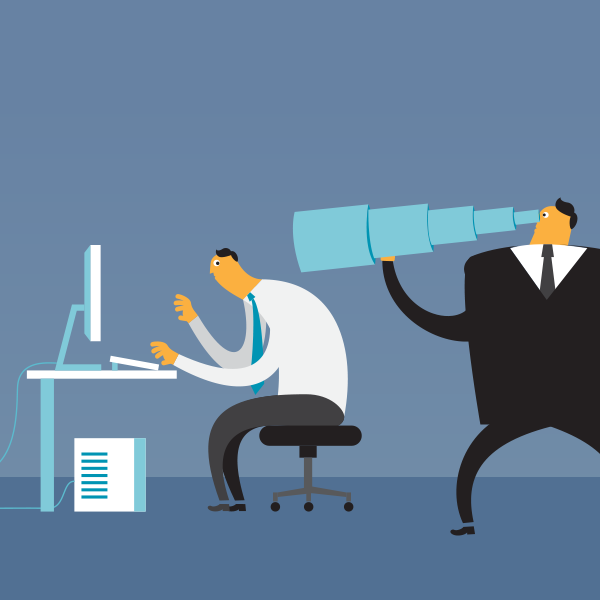 Some complete their child’s homework, some dictate their career or subject choices, and some blame others for their child’s shortcomings, but above all else, a fear of vicarious failure lies at their core. Besides being the sheer terror for every under 12’s soccer referee, these parents make one critical mistake when it comes to parenting; they do not embrace failure.

Of course, we understand that raising a mini human, constituting 50% of your DNA can be daunting.  It’s common knowledge that every parent wants the best for their child. When it comes to helicopter parents, however, the definition of ‘best’ becomes misconstrued. Instead of guiding their child to be their best, they push their child to be the best, of which we all know is an immeasurable, unrealistic, meaningless goal.

Ironically, the child of a ‘helicopter parent’ comes to adapt this ‘fear of failure’ mindset that their parents are exhibiting and are also:

Unfortunately, just like those poor employees, micro-managed children have extremely low self-efficacy and low self-esteem. They aren’t in control of themselves and are dependent on people for their thoughts and actions.  This is known as the complacent child.

The complacent child is one who is used to having everything done for them, from having their assignments typed up by Mum, to Dad yelling at their Mathematics teacher for giving them a low grade.

These kinds of children, who know their micromanaging parent will sacrifice and do all for them, can become manipulative, lazy, and unable to function independently. Even worse, they’ll be prone to throwing tantrums – and we all know how fun those can be…

So, this all begs the question:

How do I know if I’m a micromanaging parent?

Simple Answer: look at how much practical input you have into your child’s education.

Do you do their assignment for them when they’re too stressed? Do you consistently pester them about their work being done? Do you have too much of an input into their future dreams and career goals? Will you make up excuses for them if they don’t complete their work? 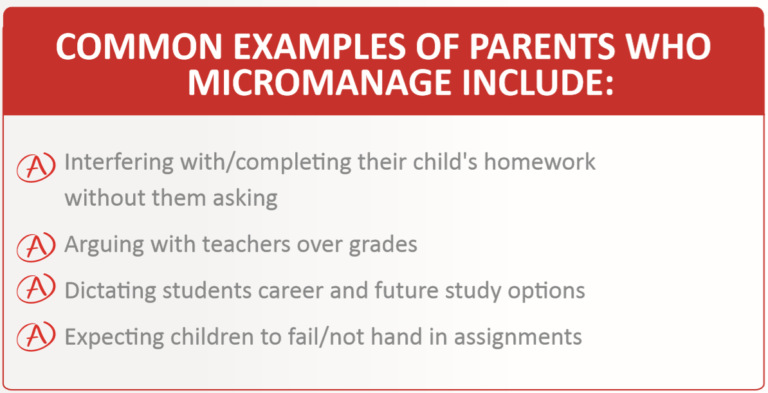 It’s one thing to focus on discussing school with your child, as spoken about in our very first Parenting blog of the series, and another entirely to control and influence their education in a very purposeful, very opposed manner.

If you do so, as a parent, you can essentially become an extrinsic motivation factor for your child. They will either want to please you, and follow all that you say because they feel they must, or they will rebel, and grow to resent your influence in their lives.

That’s the absolute last thing that we want. As mentioned in our previous blog, we believe at A Team Tuition that parents should be their child’s first and most important ally in the quest for educational success. Therefore, it is imperative that we focus on building a great way for you to manage your child and grow them into a mature, independent learner.

Managing children is about guiding them to continue to develop skills that allow them to become independent thinkers who are capable of self-regulation.  This allows parents to continue shifting boundaries which further facilitates growth.  Failure is a key component of this because it teaches accountability, responsibility, and consequence.  So, when we, as parents and supporters embrace failure, we teach our children valuable life lessons and character development.

But most importantly, we empower our children.  When we show them that not everything in your life is going to go to plan and failure is not something to be feared if they are equipped with the skills to take control of the situation.

Instead, it becomes a challenge, an exercise in developing keen analytical skills and a proactive mindset.  They can assess the situation, identify key components that contributed to it and what they need to improve to make sure it doesn’t happen again.  Failure isn’t a sign that they don’t deserve something, or they aren’t a good person, it is simply an experience in which there is a lesson to be learned.

With this mindset, children develop into adults who are extremely resilient and are willing to push themselves.  Control doesn’t always mean that they know what to do, but it means they know what not to do, and have the skills to figure out the rest which is just as powerful.

Is your child really struggling or is it you who is uncomfortable or impatient?

Failure shouldn’t always come as a surprise, but just because you can see it coming, doesn’t mean you should prevent it from happening.  Weigh up the risks and be ready to help dust them off when they pick themselves up.

It’s at this point where the magic happens.  Don’t just say “better luck next time.” Use this opportunity to develop reflective skills by asking questions like:

If your child seems unmotivated, inspire them, talk about how good that achievement is (not the person who achieved it) and how hard the people who have received it must have worked to get it. Talk about a time you worked really hard to achieve something and what it taught you.

More importantly, support your child as they fail and make mistakes. Motivate and inspire them by being loving and kind when they receive a low grade, or are struggling with a certain topic in class.

Whilst they are young, you will have to initiate this conversation in most situations but with patience, you will eventually see them start to drive the conversation as it becomes a habit.

Often these reflections begin to happen consistently as the child becomes better at self-regulating.  When this occurs, boundaries can be relaxed as growth and maturity develops.

I guarantee you – it will be one of the most impactful things you can do as a parent.