Must Read Books For Your High Schooler This Holiday

The days spent inside during the school holidays can go by really slow. Your child will most likely be bored out of their mind, or they’ll slowly begin to spend double digit hours playing video games. I, too, was one of those kids growing up, but then I discovered my love for reading, and I never looked back. Here are some books that I recommend for high schoolers to pick up over the upcoming break.

Looking for Alibrandi by Melina Marchetta

Looking for Alibrandi tells a wonderful story about Josephine Alibrandi, a second generation Italian-Australian, who is in her final year of high school. Set against the backdrop of sunny Sydney, Josephine goes through many life changing experiences, and a journey of self-growth. As a first generation Australian, I absolutely loved reading this novel, and could empathise with many of the experiences and thoughts that Josephine had. Furthermore, as a proud Sydneysider, the familiarity of locations in the novel also helped me to grow to love the novel. Josephine’s strong voice, echoing the experiences and tensions of being a dual identity high schooler is a story for the times, and will teach your children, as it taught me, to be resilient, empathetic and accepting. This novel would suit students who enjoy watching characters go on a journey of self growth.

Eleanor & Park’s simple love story has warmed the hearts of children for a long time. Eleanor and Park, two kids from Nebraska, who share a love of comic books and mixtapes of music from the 80s, slowly begin to care and fall in love for each other. Rowell’s sweet and caring voice divulges into serious and intense issues that plague many teenagers. I fell deeply in love with Rowell’s voice, and the realism of the characters and the issues they faced. Eleanor and Park’s self growth during the novel is one that your children can empathise with as well, as they journey in both Eleanor and Park’s high school life and their own. For those who enjoy a sweet and simple love story, this book is for you!

To Kill A Mockingbird by Harper Lee

Despite Lee’s acclaimed novel being written over 50 years ago, the themes that Lee uncovers, through the innocent perspective of Scout Finch, could not be more prevalent for modern society. A staple of modern American history, Lee’s novel is bound to make your child more aware of events in society, and their approaches to friendships, relationships and worldly events. I was so profoundly moved by Lee’s writing and the characters, particularly the narrator’s father, Atticus Finch, who became and is still somewhat of a role model for me. Atticus and his two children, the narrator, Scout and her brother Jem, taught me, and will teach your children, to approach serious issues with love and warmth, and be kind and equal with one another. For those who enjoy learning about current social issues in an enlightening way, this book checks all those boxes!

In the form of letters, Pung’s acclaimed novel is centred on Lucy Lam, who has won a scholarship to the prestigious Laurinda Ladies Academy in Melbourne, Australia. The timid eyes of Lucy are taken on a new journey when a trio of girls in her new grade, known as the Cabinet, take her under their wing, and attempt to help her settle into her new school. I bought this book on a whim and empathised with it wholly, from the Asian background of Lucy, to the class differences between her and her fellow classmates and so on. Lucy’s initial timid voice, which grows to be strong, proud and layered, is a journey that your child will engage with wholeheartedly and the brave efforts of Lucy to find her identity in a world so different to hers is truly a remarkable feat. This novel suits those who enjoy a simple but empowering story.

Suzanne Collins’ riveting science fiction trilogy took the world by storm when it was released and still holds a special place in the hearts of many young adults around the world. Set in a dystopian future, the novels follow Katniss Everdeen, as a competitor in the annual Hunger Games, where tributes from the 12 districts of the nation are put up for sacrifice. Intense as it may sound, the gripping nature of Collins’ writing and Everdeen’s character, as well as the originality of the plot, has made this series a favourite of mine and even now, I read the novels with the same awe as I did when I first read it. Katniss taught me and will teach your children, the value of courage and strength, how important relationships with your friends and family are, and to fight for what’s right. If you enjoy different and dystopian novels, this book is for you!

The Book Thief by Markus Zusack

Set against the backdrop of World War 2, the novel follows young adult Liesl in Germany who learns how to read from her foster family and shares books with a Jewish refugee in her home. Zusack’s interesting choice of narrator, the accurate historical depictions of World War 2, as well as a mutual love of reading with Liesl has made this book one of my all-time favourites. Furthermore, Liesl’s self-journey of discovery is poignantly described and uncovered, and any young high schooler will empathise greatly with Liesl’s character. As such, the novel taught me, as well as other readers, that nothing should get in the way of chasing your passion, and to make every day count. For those who love modern history and passionate discoveries, this book is for you!

Tomorrow, When the War Began by John Marsden

The plot of this fantastic novel follows a group of teenagers who have returned to their Australian hometown from a camping trip and see that a war has begun. With no idea where their respective families are, the group are forced to adapt to their new circumstances and grow to build relationships stronger than ever. I remember reading this book for the first time and feeling both absolutely terrified and entertained at the prospect of waking up the next day and a war occurring. Marsden’s concoction of a seemingly impossible event in Australia, as well as the intricate characters of the main group creates a gripping tale of friendship, mateship and courage, with such aspects encouraged to blossom in the novel’s readers. Children who love a gripping and intense dystopian tale would love this novel! 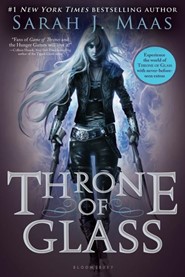 Fantasy is such an excellent genre for your child to escape to during the holidays! The Throne of Glass Series follows female assassin Celaena as she uncovers discoveries and secrets whilst working in a corrupt kingdom under a tyrannical ruler. The fantastical landscape that Maas has created, as well as the strong central character of Celaena was breath-taking to read. Celaena’s strong-mindedness and resilience in the face of obstacles, particularly when there seems to be no positive light or outcome in problems that she faces, is admirable, and something that I found myself wanting to build upon whilst reading the book. In particular, Celaena’s resilience aligns with the A Team I.N.S.P.I.R.E acronym, which APTs continually reiterate in their lessons with students, and will be a fantastic option for your child to relate to! For those who love escaping to other fantastical realms and worlds, this book is for you!

A Series of Unfortunate Events by Lemony Snicket

Despite the melancholic title and artworks of the novels, Snicket’s magnum opus profoundly touches on philosophical, ethical and moral values, themes which you might not expect in young adult fiction. The series follows the Baudelaire children, who after a fire which has killed their parents, are bounced around to different foster parents, however are continually hunted down Count Olaf who is after the Baudelaire fortune. The gothic and Victorian context, Snicket’s own contributions to the events of the novels and the sheer resilience of the Baudelaire children as they are plagued with ‘unfortunate events’ one after another, makes for an incredible piece of fiction, and will encourage strong morals, values and character in your child, as they did for me. This series is fantastic for those who enjoy tales of perseverance and historical fiction!

Louis Sachar introduced us to the beloved literary character of Stanley Yelnats, whose palindromic name was only the beginning of the many things that readers would love about the character and novel. Stanley, who has recently relocated to juvenile detention centre,  Camp Green Lake, finds out that he has distant familial connections to the Camp, and grows from being a brash, rude child, to a mature and accepting young adult. The layers of the plot, the variation in types of characters, and representation of people of colour was truly outstanding, and to this day, remains one of my favourite books because of these factors. The ability of Sacher to touch on adult themes of racism, illiteracy, arranged marriages and homelessness in a childlike manner, will open your child’s eyes to the issues around them, and encourage them to be more aware and kind to people around them. Holes is great for those who love family stories and histories, as well as layered plots and characters.